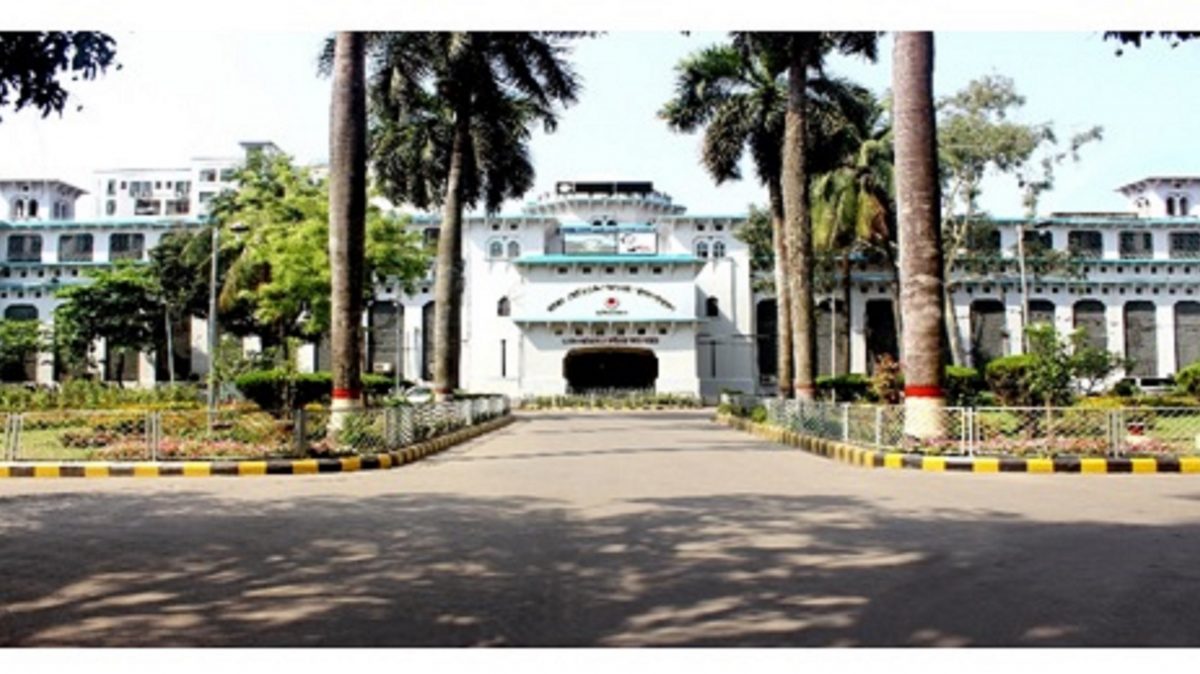 Dhaka Medical College Hospital (DMCH) is the oldest tertiary-level hospital located at the heart of Dhaka., Bangladesh. This hospital started its journey on 10 July 1946 as 200 bedded field hospital for the British Indian armed forces. The first superintend of this hospital was British major WJ Virgin MIS and the next superintend was colonel E.G. Montogomery. The main building was built in 1904 as the Secretariat office for Asham and the there angel Prince of Brinish Colonies. It has a glorious past of all democratic movements including the Student form liberation war in 1971 and the Language movement in 1952. It is an Academic Hospital and Dhaka Medical College and also Dhaka Nursing College(both graduate and post-graduate different disciplines) are undergone their practical training here.
This Hospital had upgraded to a 1080bedded hospital in 1972. Subsequently, it has been converted into 1800 bedded tertiary-level hospital. Now it is 2600 bedded (300 bedded including Burn and Plastic Surgery Unit). tertiary level hospital. Every day all types of patients from different corners of Bangladesh are reported to this hospital to get better management. We have all the specialty/sub-specialty of Medical science in this hospital. Almost all modern investigation facilities are also available. Here we want to mention some special criteria of the hospital such as a) we never refuse any patient for admission. b) We provide almost all medicines and MSR from this hospital. c) Emergency & Casualty operation is going on round the clock in this hospital. d) All investigation facilities are available 24 hours. e) This hospital has the unique team to handle Mass causality in any disaster.

History of Dhaka Medical College
Dhaka Medical College is a medical college and hospital located in Dhaka, the capital city of Bangladesh. It is situated in the Bakshibazar area of the city, close to the University of Dhaka and the Bangladesh University of Engineering and Technology.
After beginning the journey in 10th July 1946, Dhaka Medical College established a new era in the history of medical education in Bangladesh. The original idea for the establishment of a medical college in Dhaka was placed to the British Government in 1939 but shelved because of World War II. After the war, a committee was formed in 1945 and on recommendation of the committee; Dhaka Medical College started its glorious journey on July 10, 1946.
The college did not have a building of its own at the beginning; the present hospital building was built before the partition of Bengal in 1905. It was used as the secretariat of newly formed provinces of East Bengal and Assam. In 1921, it was turned into a part of University of Dhaka. During World War II the medical centre building became an American armed forces hospital. The Americans vacated the building at the end of the war and finally, the journey started on 1946. Major W. J. Virgin, the head of the committee formed to establish the Dhaka Medical College, was the first principal.
In keeping with the modest beginning, the newly created medical college started in the present hospital building with only four departments- Medicine, Surgery, Gynae and Otolaryngology. Now, Dhaka Medical College has 42 departments offering both MBBS and post graduate courses. Now, the MBBS course admitting around 190 students each year. Post graduate courses offering MD, M.Phil and Diploma in 42 disciplines and this courses now conducted by Bangabandhu Sheikh Mujib Medical University. Some short term training courses of different disciplines are running in collaboration with various organizations.
This historical institution has produced more then 10000 doctors who has kept great role in society. Dhaka Medical College dormitory (known as Barrack) was the heart of the language movement from 1948 to 1952. Students of this Medical College sacrifice their lives for the Langugage movement. The Shaheed Minar for language movement was established within DMCH compound which was later separated. In 1971, during the liberation war many students and doctors of this institution took part directly and indirectly to the war.
Starting with only one building, Dhaka Medical College now consists of a college building with a new extension, an auditorium, a Nuclear Medicine Centre, male and female dormitories, burn units etc. scattered on about 25 acres of land. In 34 different departments and 42 wards – 234 doctors, 140 interns, 560 nurses and 1100 other staffs are dedicated to ensure 24-hour health services both in indoor and outdoor. The hospital now consists of about 2300 beds with a new academic and hospital building with a bone marrow transplantation facility rendering services to almost 3500 inpatients every day.